Newly published - "A Brush with Fantasy"

an anthology of short stories and pictures

There has been a welcome return of events in 2022. It has been a pleasure to be out and abouit and meeting with people once again.

The entire collection of Tina Holley Fine Art giclee prints  is now available through the website. If you have not browsed through the print collection pages for a while, or this is your first visit to the website, enjoy seeing all the works.

As there have been fewer opportunities to show work in 2020 and 2021 we have greatly extended the range of original watercolours that can be viewed here.

The 2020 exhibition of original watercolours and prints at the Gallery, Melrose was re-instated through August. Prints and a group of original paintings are always available there. This successful exhibition also featured graphic work by Tina's daughter, Celyn. 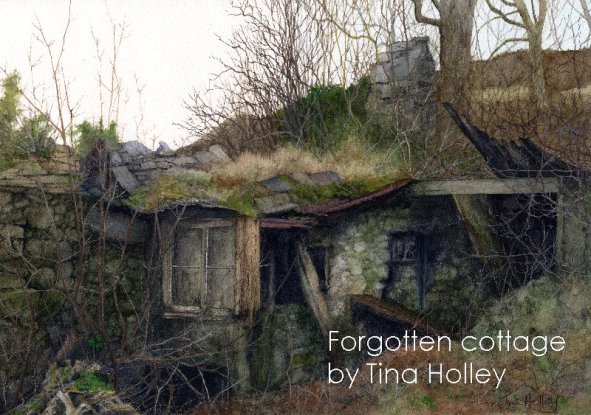 The only show of 2020 was the  Borders Art Fair in Kelso from the 13th to the 15th of March. This may be the last event for some time, it was a very busy and sociable fair, Thanks to the organisers for their continued professionalism and to all who visited the fair.

Please keep visiting the site to see what is happening in 2021.

In 2019 I was invited to be part of Art at Ancrum which took place from Saturday, May 4th to Monday May6th. This lovely event was in its seventh year and hosted over 30 artists and makers at various venues through the delightful village of Ancrum. We could be found in the pub, the Ancrum Cross Keys, a very pleasant and welcoming place to spend a successful and busy weekend.

The next exhibition was at the Gallery, Melrose from the 4th to the 18th of May. A collection of originals and prints are currently available here when the gallery re-opens in 2021.

Work was then shown at Old Gala House in Galashiels from the 25th of May to the14th of July.

From the 4th of August to the 30th of November I had a solo exhibition at Dawyck Botanic Garden. Dawyck is not far from Peebles in the Scottish Borders and is part of the Royal Botanic Garden in Edinburgh. Over several visits to Dawyck i have been inspired by the beautiful setting and their fantastc tree collection. This was a very well received and successful exhibition and Dawyck will continue to be a source of inspiration.

We showed at the Wood Market during the Tweed Valley Forest Festival, which took place in Peebles on the 19th and 20th of October. This is a really enjoyable event and is well worth a visit.

Work can always be found at the Tina Holley gallery in Bodnant Craft Centre by the National Trust's Bodnant Garden in the Conwy Valley. An extensive range of prints can be purchased at Galeri, Betws y Coed. Tina's study of Sir Walter Scott's home , Abbotsford  in the Scottish Borders is available from the visitor centre there.

All prints can also be purchased on-line, just follow the links to the other pages on our web site

Purchases can now be made in USD or Euros for delivery to the USA and Europe, just follow the links from the prints pages.

See the range of prints

Selected to be Artist in Residence for the Petrified Forest National Park in Arizona.

Tina spent October 2016 in the Park exploring hidden areas of the park to paint, as well as demonstrating to visitors and co-hosting a performance event and an exhibition of work from the 2015 Artist in Residence programme. The painting of petrified logs was completed after the residency and is now in the Park’s collection. 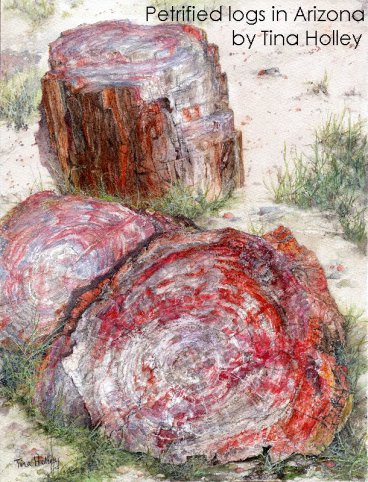 February 2014 – January 2017 Tina moved her main gallery, and husband Frank’s framing workshop to Llandudno  from the Bodnant Garden Studios, the location of their gallery since the studios first opened in 2004. Tina has retained gallery space at the new Bodnant Craft Centre which was set up in 2014 and continues to sell her work. (see more about Bodnant)

Solo exhibition at the International Museum of Art in El Paso, Texas. Forty original works were exhibited, adrenaline levels were considerably boosted by transporting the works but sales and friends were made.

Early 2013 saw an invitation by the Rocky Mountain National Park in Colorado to be one of the panel of judges for their Artist Residency programme for 2013.

Unfortunately due to the wonders of modern technology, this did not involve a trip to Colorado, but being part of the selection panel and considering work by visual artists, writers, photographers and musicians proved to be a very interesting experience.

A special limited edition print of Moel Hebog from Llyn Dinas was donated to the National Trust's Llyndy Isaf appeal. The sales helped towards purchasing this mountain farm in Snowdonia National Park. 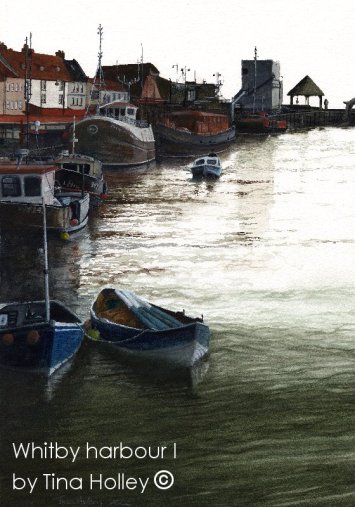 Solo Exhibition 2008 - Pannett Gallery, Whitby - North Yorkshire. The Gallery along with a fascinating museum houses a collection of work by the historical group of painters the Staithes Group. Entitled "Coast to Coast" Tina’s exhibition featured paintings of the East and West coasts of Britain and other images. The picture shown featured as the programme cover for the Whitby Folk Festival.

In 2008 the painting of Valletta in Malta received a commendation from the Royal Academy on submission to the summer exhibition. This picture can be viewed at the bottom of the page.

RSPB Commission over the winter of 2006 Tina worked on a major commission for the Royal Society for the Protection of Birds. The work was a mural (12’ x 5’ – phew !  completed in acrylics – couldn’t face that in watercolours) for their newly opened visitor centre at Coed Llandegla, between Ruthin and Welshpool. It depicts the Denbigh Moors with the black grouse lekking – one of the last few places in Britain you can witness this courtship dance - along with curlew, crossbills and other birds of the area.

Rocky Mountains Residency - Tina was selected by the Rocky Mountains National Park, Colorado to take part in their Artist in Residence programme in June 2004. She was one of only six artists in a variety of mediums  to be selected for the 2004 season, and the first artist from overseas. During the Residency talks were given as part of the Ranger Programme, and the painting of Cub Lake "Enjoying the Wilderness" painted in 2005 was on show in the Moraine Park Museum in the National Park for the 2006 season. 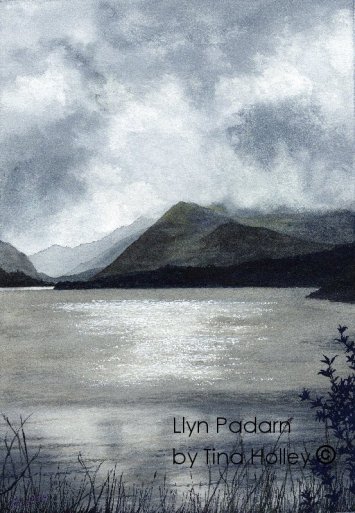 Snowdonia Marathon 2004 to 2006. Prints from paintings along the route of the race were presented by the National Trust to the winners of the Snowdonia Marathon in the years 2004, 2005 and 2006, the organiser thinking that very possibly the runners had not been able to see the countryside they were running through during the race!

Commended Artist Prize St.David's Hall, Cardiff In November 2004 two paintings were submitted and selected for hanging in the 13th Annual Christmas Exhibition at St David’s Hall in Cardiff. The painting of Grand Harbour, Valletta, Malta won one of the six prizes awarded to entries from over 260 artists.

2003 After painting works of Malta Tina was approached by Nicholas de Piro, ninth Marquis of Malta and included in his revised book of artists that have painted Malta ( that puts me between the same covers as Caravaggio – I can’t believe it !!–ed) Tina was offered an exhibition in Malta. 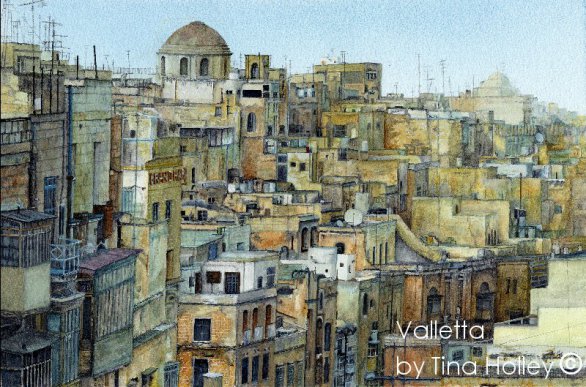 at the 2004 Annual Exhibition of the Society, the painting "Porthmadog Harbour" was voted the most popular work in the exhibition - as voted for by Members and the general public so winning the Suzanne Lucas award.

At the 2005 Annual Exhibition at Oriel Ynys Mon the painting "December Light" won the Susan Lucas  Award for the second time.

2001 Solo exhibition at Ucheldre Centre, Holyhead N. Wales hanging 60 pictures – that was a bit of a stretch.

2000  Tina won Public choice in the summer exhibition at The Ucheldre Centre.

In 1998 Tina had solo exhibitions in Porthmadog, Llandrindod Wells and Nottingham

In 1996 Tina had her first solo exhibition in Porthmadog’s Flour Shed Gallery. Hanging 40 pictures which, if you, dear reader are still with me now, I can say was a bit of a roller coaster ride because my first ever painting was done for Frank’s Christmas present in 1995 and I sold my third ever painting 2 months later .

It took a while for me to accept that I was a painter – I had been told at school that I had no talent so I should stick to Latin and Ancient Greek which I dutifully did, but which, apart from being able to translate the latin names of roses, didn’t get me that far – I can’t even order an orange juice in Athens but I can warn them that the Spartans are coming up the hill !

So I am a self-taught (and self-teaching-I don’t think you ever stop learning) artist, who’s had a whale of a twenty-six years.  Thank you for reading this and I hope you like the pictures.